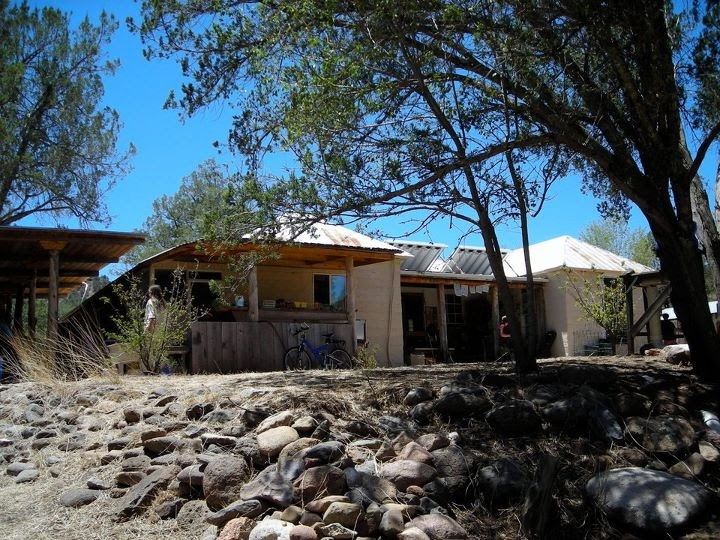 In the Fall of 1993 I came home from work and was reading the Ruhaniat Newsletter, which was printed and mailed in those days. There was a article written by Murshid Moineddin Jablonski, in which he described a vision he had about the creation of a land based Sufi community in the Southwest of the U.S. As I remember, he credited his teacher, Murshid Samuel Lewis as the source of this vision. About an hour later, after my initial contact with this idea, I phoned him and said I was interested in helping to bring this vision to fruition.

Several times these sort of intuitive leaps have resulted in some of those profound changes in the course of my life. As a result I joined with a small group to form a strearing committee, with the goal of finding the land right for this endeavor.

Over the next year and one half the participants of the committee searched for land that would meet the requirements. Eventually we found a location near Silver City New Mexico. Some of the members of the search community visited the site with the real estate broker. The conclusion was we decided to purchase approximately 1,900 acres along Bear Creek about 20 miles north west of Silver City.

The initial vision for the project continued to manifest. It was articulated in three spheres. 1. To create a retreat center where the teachers from the worlds spiritual traditions could be invited to come and share there wisdom. 2. Founding of a residential community to act as caretakers for the land and work to together to host camps, other events, and individual retreats.

This land included three miles of Bear Creek, which fed into the Gila River, This specific piece of land was unique, in that the three miles of creek passing through the land was the only part of ther creek that flowed on the surface continuously all year. The site was an old early 20th century ranch. This included an old farm house and a few outbuildings, but more significantly, several water rights, include one to the Bear Creek flow dating back to 1878.

The challenges of the next years was raising funds to retire the mortgage and fixing up the existing old old rand homestead so as to be able to host camps and the events We had originally raised a litttle over $100,000, ending up using all of that plus some more for the down payment. So we started with a strong vision and about $600,000 debt. During the next 10 years most of any donations, along with selling some sections of the land that were geographically isolated from the main parcel, went to servicing this debt. During those early years many volunteers worked many hours using mainly what was there to make improvements. We held several camps that frequently combined spiritual practices and work projects.

In the 2000’s a small population of caretaker residents began to grow. Some of these pioneers rented the few available indoor facilities. Some others constructed cabins at their own expense. All worked together to care for the land, along with preparing for, managing, and staffing events held at the SSC. By 2010 this community of stewards numbered around 10.

Over the next few years through cooperative efforts the residents and visitors engaged in numerous improvement projects. We created fencing for the garden areas. We also constructed some additional living spaces and built a retreat cabin across the creek, not far from where Murshid Moineddin’s gravesite is located here.

By 2018 there were 14 participants here, helping with events and in caretaking the land. In that year a big change came about when the SSC entered into a conservation easement agreement that will protect most of the land from development in perpetuity. Another benefit that came from this agreement was a sizable grant that opened the way for major renovations and improvements on a much greater scale. These projects include two new wells, a community water system, and several ongoing projects including a new Dance Pavilion and major renovations of the old ranch house into a much improved and beautified retreat center facility.

After these many many years I am still happy to be here and grateful for the many blessing I have experienced this amazing life adventure.

May the message of God reach far and wide,

The Southwest Sufi Community is a non-profit gathering place near Silver City, NM for those committed to inclusive spiritual practice.